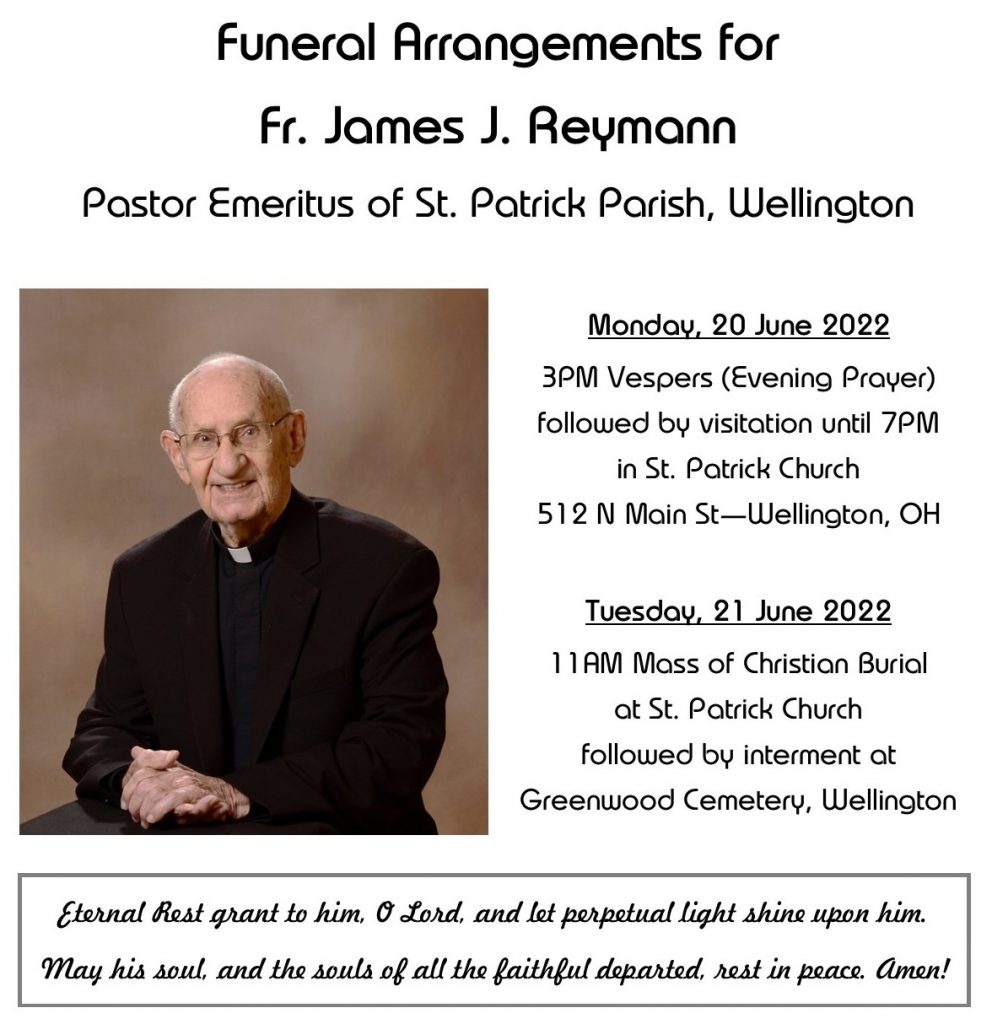 Born on April 17, 1924 in Akron, Ohio to the late Charles and Mary Salome (nee Zaber) Reymann, James was one of sixteen children in a large, loving family. Fr. Reymann graduated from St. Vincent High School in 1942, and spent a semester at the Jesuit University of Detroit before being drafted into the Army Air Corps in February of 1943. During his time in the service, Father Reymann trained as a radio and radar operator, and became a B-29 navigator. He was esteemed for his innate sense of direction, even using the sun and waves and prayer to guide him when equipment failed. He ultimately earned the rank of 1st Lieutenant. After 40 months of service, ten of which were spent on Guam, Father Reymann was honorably discharged and resumed his education in Ohio.

Father Reymann attended John Carroll University before transferring to Case Institute of Technology, where he earned a Bachelor of Science Degree in Engineering with a concentration in Metallurgy in 1951. Later, Father joined St. Meinrad Seminary in Indiana, specifically the Benedictine Monastery, where he focused on Greek and Latin studies. Upon completion, he entered St. Mary Seminary in Cleveland, and celebrated his ordination on May 24, 1958. Subsequently, he was assigned to Borromeo Seminary as a math and science professor for 18 years, and took great pride in enhancing the campus landscape with his botany skills. He also served as the Athletic Director for the university. Continuing his zest for learning, Father Reymann earned additional certifications in 7 fields of study from John Carroll University, culminating with a Master’s Degree in Physical Science from the University Of Notre Dame in 1965. Father was a life-long fan of his alma mater and the Fighting Irish.

In memory of his parent’s legacy, Fr. Reymann along with many Reymann descendants, established the Charles and Salome Reymann Foundation in 1967, dedicated to improving the lives of individuals with developmental disabilities. He served at the first Chairman of the Board for the Foundation. In January of 1976, Fr. Reymann received the appointment as pastor of St. Patrick’s Catholic Church in Wellington, Ohio, where he became a pillar of the church and community until his retirement in 2016. His initial assignment was the design and construction of a new church and facilities for St. Patrick’s, a project in which Father took great pride. Father continued beautification of the church grounds with lush landscapes, featuring rose beds, lilies and gingko trees as part of his living legacy.

Realizing his responsibility to the community and passionate about helping others, Fr. Reymann fostered Ecumenical ties with other Wellington churches, served on many boards and local committees, sponsored the building of Saint Patrick’s Manor for low income housing, and championed the Railroad Underpass project for the Village. However, Fr. Reymann also reached beyond the borders of Wellington to support missions in San Salvador, Guatemala, New Mexico and Philadelphia, just to name a few. The vastness of his generous philanthropy to causes near and far greatly impacted countless lives.

Throughout his life, Father Reymann had a genuine love for boxer dogs, with many being his constant companions. Charger, SOC (Successor of Charger), Patrick and Pat (I, II & III) have preceded him, but Fr. Reymann was always grateful for their loyal friendship and protection. When asked if pets join us in heaven, Fr. Jim’s quirky answer was “If we need our pets to be perfectly happy, then we’ll see them there”.

Father James Reymann was the last living member of his immediate family, therefore passing the great legacy of the Reymann family to his nieces and nephews. In addition to his parents, he was predeceased by his 15 siblings: Charles, Helen McGraw, Joseph, Gilbert, Mary Lindsey, Marcel, Martin, Bernard, Agnes Kennedy, Vincent, Richard, Father Albert, Cletus, Clement and Thomas. He is survived by sister-in-law Barbara Reymann Strigle, oodles and oodles of adoring nieces, nephews, great nieces and nephews, the beloved parishioners of St. Patrick’s church and the wonderful residents of the Village of Wellington.

Father once said “I have always thought I have benefitted from the grand people who have touched me in my life, and the number has been many. I love them so”. In his memory, please donate to: St. Patrick’s Endowment Trust (established by Fr. James Reymann), St. Patrick’s Catholic Church, 512 N Main St, Wellington, OH 44090, or the Charles and Salome Reymann Foundation, PO Box 13441, Fairlawn, OH 44334.